What a U.K. Guitar Store Can Teach You About Content Marketing

But I think that, as a marketer, there's a lot we can learn about marketing from watching how one particular music store in the U.K. has leveraged content marketing to grow their business.

Andertson's is a small (although not that small anymore) music instrument and equipment store from Guildford in England.  Since 1964, they've been selling guitars, amplifiers, drums and almost anything else you can think of.  They aren't a chain or franchise, they are just one retail location with an online store.  Here's the founder in the 1960's. 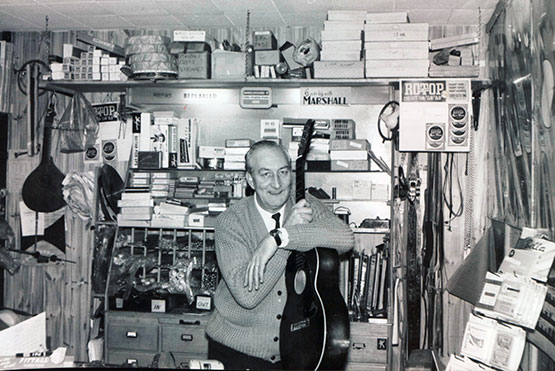 Last year, Anderton's was the first company outside the U.S. to win the NAMM dealer of the year award for marketing, customer engagement and retail innovation.  For those unfamiliar, NAMM is the National Association of Music Merchants, they are an association that represents over 10,000 members in over 100 countries covering over $17 billion in merchandise.  Anderston's had previously won NAMM awards for online engagement in 2017 and 2018.  They are also known for being one of the top 150 UK e-commerce retailers.  Needless to say, Anderton's is not a small store anymore.

The core of Anderton's content strategy is their Youtube channel Anderton's TV.  Since 2010, their channel has gained over half a million subscribers and over 130 million views.  But they don't just produce content on their channel about guitars.  They also cover drums, technology and keyboards.

From what I can tell, they have really pioneered a number of unique and authentic ways to present the subject of their content.  First, they like to try and capture their initial impressions about the equipment they feature so instead of doing a complete deep dive on everything, they like to get something set up and film their genuine reactions.  Next, they use a number of interesting and creative narrative devices to demo the gear.  They'll do blindfold challenges, shootouts where they compare expensive and affordable gear and hilarious challenges like the time they chose gear that each of the hosts would hate.

What you can learn from this?  What's the thread the runs through all of this content?  It's helpful, well made, well researched and designed to entertain and/or inspire.

Have they seen results?  I'll let Lee Anderton answer that:

I first became aware of Anderton's through their partnership  with Rob Chapman.  Rob was one of the first Youtube content creators to break out in the guitar gear space and he now boasts close to 700,000 followers on his channel.  I noticed he was doing a number of different videos with UK guitar stores, then he teamed up with Anderton's to create content in partnership with them.

Rob and Lee Anderton (owner of Anderton's) ended up having great on-camera chemistry, became close friends and over the last five years, helped make Anderton's TV one of the most popular Youtube channels in the guitar gear space.

What you can learn from this:  Spending time choosing the right influencer and developing a long-term relationship with them is a great way to build your audience and your trust level with them.

Hard to say for sure, but I'm pretty sure that Anderton's TV might not have grown as fast as it did without Rob.  Here's them telling us the story of how they started working together.

In addition to producing content that is helpful, the team at Anderton's regularly produces content that's fun and they don't take themselves too seriously.  In fact, the majority of their most viewed videos are ones where they are joking around and just having fun with the gear they are trying out.

One of their most viewed videos ever is a demo they did for a ridiculous pedal from Japan called the Miku, has over 2.4 million views:

What you can learn from this: It's often hard to know exactly what content is going to get traction so don't be afraid to try some different things and mix it up a bit.

I've blogged about Anderton's in the past as I included them in a round of great content marketing examples from last year.  If you're interested in learning more about video production, we've written a number of popular posts on that subject as well.

If you have any questions about content marketing or marketing in general, feel free to reach out for a free consultation.