You can also upload your email marketing list and target those people provided they have Facebook accounts.  The advantage of doing this is that you are able to target your message on Facebook as well as email.  Even if you have an amazing open rate, 50% to 60% of people never see your email messages.  With custom audiences, you can use Facebook advertising as a second channel to get your message across.

If you're an organization that uses enagement goals such as time spent on your website, you can now target ads based on that data point as well.

Don't think of your Facebook ad creative like you of think print ads.  Facebook has an ad unit called a carousel ad and you can use it to tell visual story across a few panels that stretch out right inside the newsfeed of the audience you are targeting.  So instead of just seeing some text and one image, people see more than one image and text. 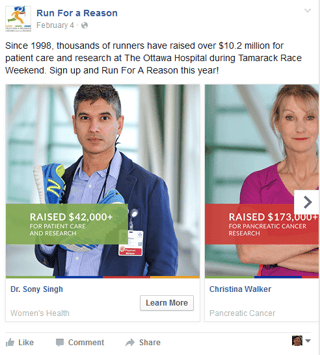 Facebook has made it easier than ever to track converstions using their new tracking pixel.  The concept is fairly simple - drop a small piece of code onto your website and then create a custom conversion for the action you want people to take: view some website content, donate money or sign up for your newsletter.

Then you're able to evalute and optimize your ads based on their ability to meet that goal.  Unless you do this, you're not getting the full picture of your advertising success.  I have seen ads with lower click through rates that produce higher conversion rates.  If I was optimizing only on clicks, I'd be missing the most important piece of the puzzle.

Given that 54% of Canadians use Facebook daily and that over 70% of the population is on Facebook, it's a great way to reach your audience.  As it becomes harder and harder to get your content seen organically on Facebook, paid ads are one of the best ways to reach your marketing and communications goals.

If you want to know more about Facebook advertising for your non-profit or foundation, contact us today!